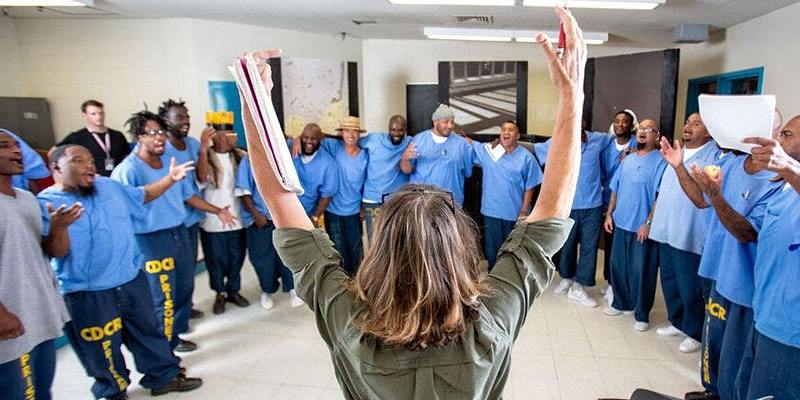 Come watch and discuss No Joke Theater’s, FAMILY AND ADDICTION, written by inmate participants from CA State Prison – LA County, performed by NJT teaching artists and returning citizen alumni, who will be in attendance at the live Q&A.

(While working on a 2-hour production of scripted and original material, NJT had to halt its program, mid-process due to COVID. The only thing that could be salvaged was a handful of scenes, handwritten on scraps of paper, which were carried out in Ms. Joki’s backpack.)

FUN FACTS: The scenes are first drafts, from first time writers, who were first time class participants. And… the performers had ONE rehearsal!

Leah Joki is an actor, writer and Artistic Director of No Joke Theater. She worked in 30 prisons over 23 years, profiled in The Los Angeles Times, American Theatre Magazine and The LA Weekly. Her memoir is Juilliard to Jail; one-woman show, Prison Boxing, nominated for Best Solo Performance; BFA U of MT, MFA Juilliard Drama School.

Louie Brash served 25 years for a crime he committed at the age of 16. He “developed confidence, communication and memorization skills.” He works with Paws For Life, attends college, interns at NBC and is a Prison Reform and Restorative Justice advocate.

William Brown was first arrested at the ago 8. He did 28 years. He is Director of California Prison Focus and founder of KAGE Universal (prisons.org), which reduces prison population. His music; Min King X aka Pyeface is on iTunes and iheartradio.

Nelo Butler is a bi-racial L.A. based actor, writer, pianist and script supervisor. He starred in the YouTube series, Cuisine de la ‘Pocalypse and Space Car. Studied at the University of Montana and the Beverly Hills Playhouse.

Anthony Coleman served 20 years. He acted in One Dream Away and Fathers and Sons. He was an inmate mentor for Lost and Found. He claims the theater program changed his life, his perspective and gave him a strategy, so upon release he attended LACC.

Tue Hyunh was arrested at the age of 17, served decades in prison. He joined NJT “to earn a certificate, but it changed my perception.” Tue volunteers for LA County, Defy Ventures and Whole System Learning, and is a student at Villanova University.

Juliette Jeffers (Carol) is a Caribbean American actor, writer, director, producer and teaching artist. TV credits: Chicago Med, All Rise, Snowfall and Kidding. She has five solo plays that she has written and performed in and coaches and directs other solo artists.

T Valada-Viars is an actor/director/teaching artist/corporate training consultant and mime. She has over 30 years of experience producing non-traditional theatre in unconventional venues with diverse populations

Whitney Wakimoto is an LA based actor and director. Shakespeare Theater of New Jersey and Montana Repertory Theatre; The Good Person of Setzuan, Measure for Measure and Big Love. BFA U of MT, MFA U of San Diego. Actor’s Equity.