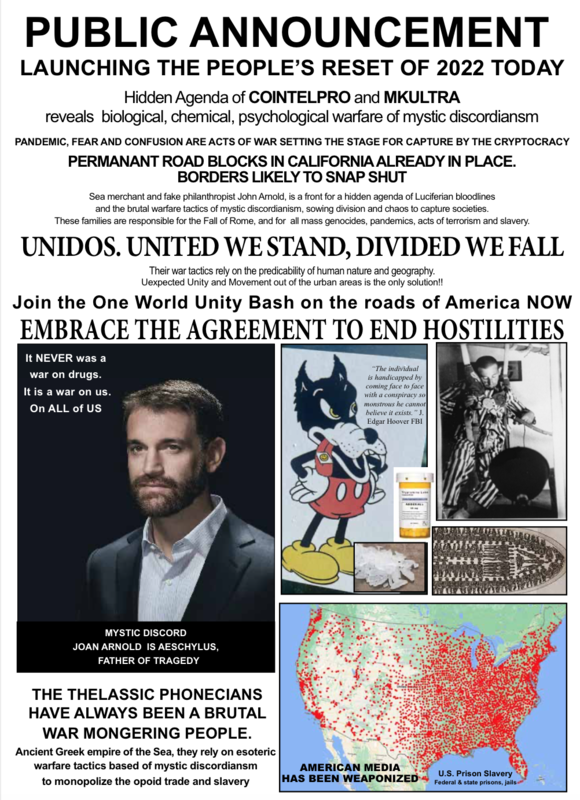 Sea merchant and fake philanthropist, John Arnold, is AESCHYLUS, Father of Tragedy, from the Greek mythology on which disordian mystics base their warfare tactics. The weapons of these predatorial bloodlines are esoteric (nonphysic thus invisible) and particularly dangerous, due to our enemy’s affliction of psychopathy, having no empathy. With no moral constraints, they control the flow of information and resources, and manipulate the ACTIONS of people who do have empathy,  exploiting  the ego, sexuality and emotion of their victims. By taking control of the people, in both body and mind, along with their various modes of warfare, psychopaths overtake societies. Concealing torture and assassinations - including prison slavery - with deception, they surveil and sabatoge, employing  highly sophisticated and devestating Campaigns of Turbulance, Campaigns of Tension, and “Whispering Campaigns”. Using a process they called “physic driving” they infiltrate media and literature to get the masses used to the future they want to create.

Their goal is chaos. Their logo includes a symbol reflecting their mission to reduce the world population by 3/4.

The euphamistically named “risk assessment” funded by John Arnold, is a tool for social control, that was used to drive people into prisons and urban areas, so they can trigger the chaos paving the way to global control.

A PROPHESY is A PREDICTION, Not a fact.  It’s what will happen IF we do NOT act

"The consequences for the world and my children and my grand children, and everyone else's, of humans not intervening in this process that's going on now evermore quickly, we are condemning our children and grandchildren, and indeed ourselves - indeed it's that close - to a world that George Orwell so massively understated." David Icke